Protocol can be tricky. Maybe you’ve been checking out drone footage online and think it’s awesome, but wouldn’t know what to do if you saw one out in real life. Perhaps you’ve seen people flying them but didn’t know if it was appropriate to approach them. Or maybe you’re about to work with an aerial cinematography team and want to make sure you don’t embarrass yourself by crossing any lines. Whatever the case, here’s a list of some of the guidelines to live by if you encounter a drone in the wild. 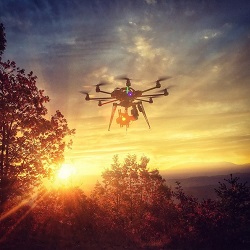 Chances are good that you’re not in some sort of Truman Show-esque plot to film you without your permission. If there’s a drone above you and you think the camera is pointed toward you, it’s likely that you happened into their frame. The best thing you can do is carry on normally without staring at, pointing or waving to, or making obscene gestures toward the camera. The aerial cinematographers just want to get their shot, they don’t care about you unless you ruin things by flipping the bird in the middle of their beautiful flyover. If you’re concerned about your privacy, your best option is to walk away with your head down. If you want to get a good look at the cool ship, wait for it to land and track it down.

#2 – Don’t approach a pilot during a flight. 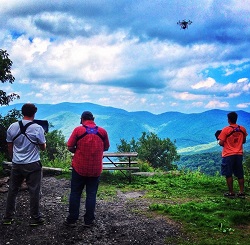 The last thing a Pilot needs while he’s focusing on the $30,000 of electronics he’s causing to defy the laws of gravity is for you to come up to him and start asking him questions about the drone. Instead, you should wait for a safe landing before approaching or talking to anyone on the team. Most Pilots won’t mind answering questions or chatting about what they’re doing as long as they’re not rushing to get back up in the air. However, if you see a third team member such as a Safety Officer, it’s probably best to approach them rather than the Pilot.

#3 – Questions are great, we love educating the public.

The vast majority of people working with drones are happy to tell you about how cool their technology is. Just remember that if it’s a professional team, they’re working and are probably on a schedule. Unless they’re obviously just hanging around waiting on something, try to keep your questions reasonably brief so they can get back to work.

#4 – Ask for permission before approaching the ship… but never touch it (or any of the gear). 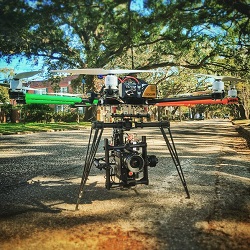 In most cases, you should give yourself a healthy 20 foot buffer between you and the drone. This keeps you safe and keeps the Pilot’s blood pressure lower. If you want to get a closer look or take a picture, ask the Pilot or Safety Officer if they would mind you having a look, taking a picture, etc. However, under no circumstances should you touch someone’s drone. This protects you from accidentally breaking anything or causing any harmful changes, and if something goes wrong and the motors start, you’re a lot less likely to lose a finger. Same goes for any other gear such as radio controls, batteries, cameras, etc.

#5 – Try to not ever be directly beneath a drone.

A good Pilot will never fly over people unless they are actors who have previously had a safety briefing. However, you can help by avoiding walking underneath an airborne drone, especially if it’s fairly low. Worst case scenario, a drone could fall out of the sky and you really don’t want to be in the crash zone. Sometimes you may not be able to avoid going underneath a ship, so in those cases just be sure not to linger.

#6 – If a Pilot is flying recklessly, get out of the area and contact law enforcement.

Flying drones is legal in the United States, but endangering the public is not. It is well within your rights to report a reckless Pilot to local police. Of course, your first duty is to get yourself and any others out of the dangerous area. Because of the growing number of inexpensive drones made available to so many people, it is unfortunately possible for unqualified and reckless people to do stupid things like flying over crowds at events or buzzing people in parks. If possible, safely get away from the dangerous drone and get somewhere where you can monitor the Pilot until law enforcement arrives. We do not recommend confronting dangerous Pilots yourself.

#7 – Conversely, if a Pilot is flying safely, please don’t bother them.

Sometimes people see a drone and automatically assume that it’s dangerous, spying on them, or a nuisance. Even though the team may be practicing all safety measures and be well within legal rights, some people will call law enforcement on them out of ignorance. Local law enforcement will usually be aware of professional drone teams operating in the area, and the incident will go no further than a phone call. However, if law enforcement is called out on a safely operating drone team, the incident interrupts the work of the team and wastes the precious time of law enforcement.

#8 – For the love of all things good, please don’t try to crash the drone.

Throwing a rock at a drone might seem like a fun idea until you realize that even small drones cost over $1,000 and bigger ones can come closer to $100,000 including the camera. A Kentucky man was recently charged with a felony for shooting down a small drone, and legally he may be obligated to foot the bill for the destroyed ship. It seems that many people see drones as much more sinister than they really are (no, the kid at your local park is not flying the same thing that the military uses) and think that it’s their duty to take one down. But the reality is that attacking a drone is only going to cause much more trouble than anyone needs.

Drones are safe and awesome if used correctly, but can be dangerous if not treated with care and respect. Remember that fact and you’ll make wise decisions about what to do or not do. Safety always comes first and drones are how some people (like us!) make a living, so be courteous to drone teams who are trying to get their shots while keeping you and everyone else safe.

If you found this post helpful, please share it so we can help to educate the public! Is there any other drone protocol you’d like to know about? Let us know in the comments!