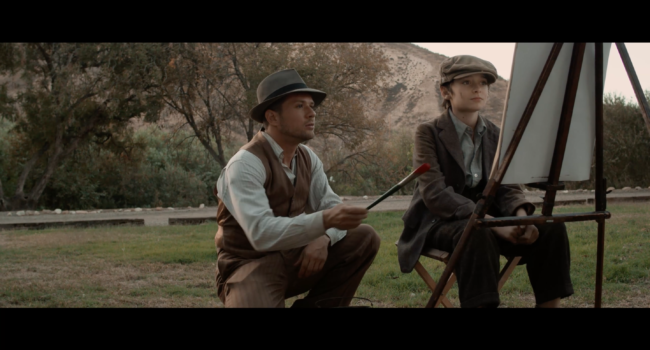 I was lucky enough to be included in the production pipeline to provide some workflow support and found that I really enjoyed all of the changes that DJI included in the Inspire 2 such as a new file system to allow a simpler offloading of media on set.  Something as simple as that feature can be overlooked by most pilots because it’s not something they generally deal with, but trust me when I say the DIT or DATA Loader on set will love DJI for this. There are a lot of other fantastic features added that I won’t go through in this post.  You should go head on over to the Inspire 2 page for all the details.

Now back to the show! I couldn’t let a good thing end at the wrap of production.  I wanted to know how well these files would hold up through post production, so we enlisted the help of Technicolor in Hollywood, CA. for the finish of the short film.  I wanted to see this through from start to finish because I’m sure we’re going to be seeing footage from the Inspire 2 showing up on many more productions once it launches.

DJI has an amazing team of creatives that handled all the editorial and visual effects in house.  They worked in the camera’s native resolution of 5.2k and then downsized it all to 3840x2160 UHD for the finals.  We discussed how they would finish the project and what type of turn over to provide to Technicolor for the grade.

Our goal was to work off the native Cinema DNG files throughout the process to ensure that we always had enough range in the image to accomplish the look the DP wanted.  The Inspire 2 camera RAW setting captures linear Cinema DNG files.  The files aren’t as flat as some of the LOG files we’re used to seeing, but they’re still very useable.  The DP came up with some settings on his Black Magic Design Da Vinci Resolve system to help pull out some of the details in the shadows and bring back some of the highlights. We took his settings a step further in the color session to really bring out every bit of detail.  The good news for those of you who need to acquire in LOG to match a main production camera such as an ARRI ALEXA, is that DJI confirmed that they will have their “D-LOG” option for ProRes in the near future.

The DP and Director had a very specific look in mind for this short.  “The Circle” is period piece set in 1939 just after the Great Depression.  They wanted the film to have an antique feel without being too muted.  We sat together in a session with entire team to set the look with Technicolor Digital Colorist Mike Sowa.  Claudio and Mike have worked on features together in the past and quickly put their “shorthand” dialogue to work.  The session was an open forum with input from the DP and director while Mike applied all their feedback in real time.

We went through setting up a series of looks and reviewed them all in some key scenes and locations before finally settling on the right look that would visually sell the story.  After everyone agreed on the overall feel, we all left Mike alone to take his time going over the entire film.  Mike’s color pass looked fantastic!  There were very few notes from the team to address.  Actually, the color was so spot on that we took advantage of the review session just to play a bit more and accentuate some details just because we could.

The end result was premiered at the Inspire 2 launch event in a theater on the Warner Bros. lot.  It was projected in UHD and followed up by a Q&A session that included the DP, Director, executive Producer Dana Brunetti, and moderated by Producer and DJI’s Marketing Director Willis Chung.  The panel discussion confirmed that they were more than pleased with the capability of this camera and would never have imagined that they would be sitting in front of a crowd of people talking about shooting a film on a drone!  Well lucky for us, they did and in my opinion, it was a big success.  I was honored to be part of this shoot and I sincerely look forward to seeing what other creative ways people to find to use this technology for their own productions.

You can watch "The Circle" and the behind the scenes videos on DJI's YouTube Channel.  Click the links below to take you right to them.

DJI Behind the Scenes