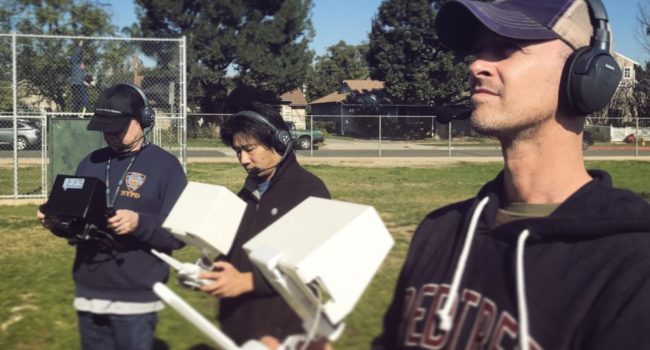 The success of a well executed shot depends on a number of factors, a significant one being the clear exchange of information. This synergy is particularly important when flying drones as several lines of open and cross-communication are required amongst the various people involved including pilot, gimbal operator, visual observer, director, and/or DP.

Given that circumstances don’t always allow these parties to work within close proximity to each other (and don’t more often than not), a solution is required that is wireless, covers an effective range, and is clear without any static or delay. Let’s not discount affordability, another significant factor when considering all the equipment and expense that goes into a professional drone operation.

As an experienced drone pilot, camera operator, and owner of Sky Bandit Pictures, I’ve researched and tested numerous possibilities: 2-way recreational radios, walkie-talkie apps, open phone lines, and more…they all had their issues resulting in more frustration than usefulness. The systems that seemed like they might actually do the trick cost thousands of dollars. It wasn’t until I had the opportunity to work with another drone team that I was exposed to Eartec and their line of full duplex headsets: hands-free and “open walkie”-style, allowing multiple people to speak at the same time. In this particular scenario I was operating the gimbal at one end of an elevated path where I could best view the talent. The pilot was roughly 100 feet further up the path where he had the best view of the drone. The director and DP were in Video Village another 50 or so feet further along and the Visual Observer was elsewhere in the mix where he could get the best view of the entire operation. It was a great shoot but I was most excited by the headset system we were using which was crucial in facilitating the communication required for flawless takes. I made note of the gear and as soon as I got home and online I looked up www.eartec.com.

Eartec has a variety of products but the UltraLITEs are the ones that suit my operations best. The headsets which come in single- and dual- ear configurations feature full duplex communication with individual muting capabilities, rechargeable batteries, and up to four users can be linked without any additional hardware (everything is self contained in the headsets). The wireless range is more than sufficient to cover the majority of shoots we work on. A complete system including an extra charger, extra batteries for all headsets, car charger, and carrying case can be had for less than $1,000. Adding a hub increases the number of users to seven and transmits ¼ mile from its base. You can also customize a package with fewer components and expand over time.

I purchased the UltraLITE system and it returned immediate value in the newfound comfort that came with worry-free communication on set and the added level of professionalism to offer my clients. For any serious drone operation, clear, zero-latency, full duplex communication is a must. Based on the research I’ve done and the frustration I’ve experienced in the past with other so-called solutions, the UltraLITE system from Eartec is a no-brainer.