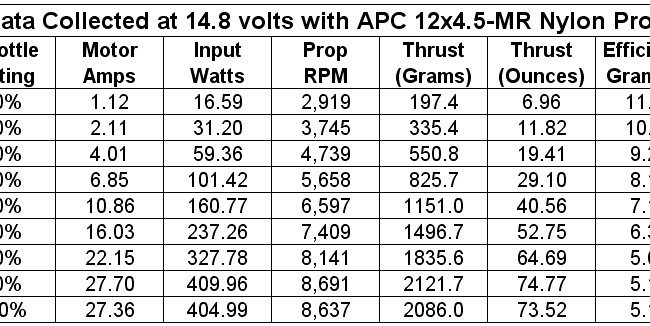 Once pilots get their multirotors operating well, and start actually doing things with it other than tearing holes in the sky, one of the first hurdles faced is increasing the available flight time. Most pre-packaged, ready-to-fly multirotor models come with a battery pack that will only last from 8 to 10 minutes of normal flying. For many, this is long enough, but for others that wish to do aerial photography, survey work or other professional type applications, there is always a desire to extend the flight times. Getting flight times in the 20 to 30 minute range is achievable with many multirotors that are available today, but there is a bit more to it than simply strapping more batteries on the model. In this months installment of Multirotor Flight we will take a look at how to maximize the efficiency of the multirotor power system in order to get the longest possible flight times.

First and foremost, there are a few basics about flight that must be considered. Number one is the fact that “Lighter Always Flies Better”. This is especially true in multirotors since the weight of the machine takes a certain amount of power to hold in the air. Heavier machines require more power and therefore they will have shorter flight times than lighter machines.

The third thing to consider is slower turning props are more efficient at creating thrust that faster turning props. Props are essentially little wings going round and round generating lift. Basic aerodynamic principles show that the drag on a wing increases exponentially as speed increases, and this is the same with props. Props that are spinning faster have greater drag losses than slower spinning props, and this robs a model of flight time.

Weight is always a factor in considering flight times for electric powered models of any kind. Design engineers will always say, “Design an aircraft to fly, not to survive a crash”. There is always a trade-off between structural strength and weight when designing aircraft. All aircraft must be built strong enough to survive any of the forces they will see in the air, but also be able to handle a bit of “hanger rash” and the occasional not-so-perfect landing without falling apart. Modern carbon fiber composites, light-weight aluminum alloys and molded plastic parts work together in many multirotor frames available today providing an airframe that is not only strong, but also light weight. The best starting point to maximize flight times is to use as light a frame as you can to get the job done.

Another consideration in the weight part of the equations is the total weight of the power system. Careful attention needs to be paid when selecting motors to make sure they are matched to the power that is actually needed to do the job. If a machine needs motors capable of producing 200 watts each, and larger motors capable of producing 400 watts are used, the total weight of the multirotor will be higher than necessary and this will require more power to keep the craft flying. Always remember, lighter always flies better, and also longer!

Next let’s take a look at how propellers factor into the flight time and efficiency of multirotor power systems. Larger props will always be more efficient than smaller props, because they move a larger column of air downwards as the props rotate. From 7th grade geometry class, we all know that the area of a circle is equal to Pi times the radius squared. For a 10 inch diameter prop, the cross sectional area of the column of air moved down by the propeller is equal to 3.14159 x 5 x 5 or 78.5 square inches. If you go to a 14 inch prop, then the area is equal to 3.14159 x 7 x 7 or 153.9 square inches or roughly double that of the 10 inch prop. With the larger 14 inch prop, you only have to move the air downward at half the speed to move the same volume of air compared to the 10 inch prop. Since less energy is required to accelerate the air, less current is pulled from the battery and flight time increases.

Prop efficiency is commonly expressed in the number of grams of thrust created per watt of power consumed by the motor, such as 8.5 g/W. The higher this number is, the more efficient the prop is at converting the rotational energy of the motor into thrust. Figure 1 shows a chart of the efficiencies of several different size props running on the same motor. Each of these props is spinning at an RPM that produces 500 grams of thrust. As can be seen from the data, the larger props turn at a lower speed to generate the thrust AND require less power to do so. When you take the grams of thrust created, and divide that by the number of watts used by the motor, you get the efficiency factor of that prop at one specific thrust value.

From this data, you can quickly see how prop diameter affects flight time. If you had a quadcopter that weighed 2000 grams (4.4 pounds) you would need to make 500 grams of thrust from each motor to hold the craft in a stable hover. From the chart you can see that the 10 inch props have an efficiency of 9.08 grams per watt while the 14 inch props have an efficiency of 11.55 grams per watt. This is an increase in efficiency of 27%, so all other things being equal, switching from 10 inch props to 14 inch props would give you an increase in flight time of 27%. Of course, this is assuming that the motors are actually capable of running the larger props without exceeding the maximum current rating of the motor. In some cases, it is necessary to use a lower Kv motor to have the torque needed to spin the larger prop without exceeding the motors maximum current recommendations.

If this data is taken one dimension further, we can see how rotational speed affects the efficiency of propellers. Props act much like wings from an aerodynamic standpoint. The parasitic or skin friction drag of any wing increases as a function of the square of the speed. Because of this, if a prop is rotating at twice the speed, the drag is 4 times higher. Figure 2 shows a set of data collected with a brushless motor running on 4 Li-Po cells with an APC 12×4.5 Multirotor prop. This table shows the performance of the motor over its full range of operation at throttle settings from 20% up to 100% throttle. From this chart, if a graph is created that plots prop efficiency versus throttle position the data set will look like the one shown in Figure 3. From this graph, if the machine is hovering at 50% throttle the efficiency of the props is approximately 8.2 grams per watt. At 40% throttle this value increases to about 9.3 grams per watt, and at 60% throttle it decreases to 7.2 grams per watt. If your multirotor is heavier, not only do you have to generate more lift to keep it flying, the props are also less efficient at producing thrust, so you get hit even harder on the current draw from the battery. On the other hand, if your machine is lighter, you need less power and the props are working more efficiently which contributes to longer flight times. 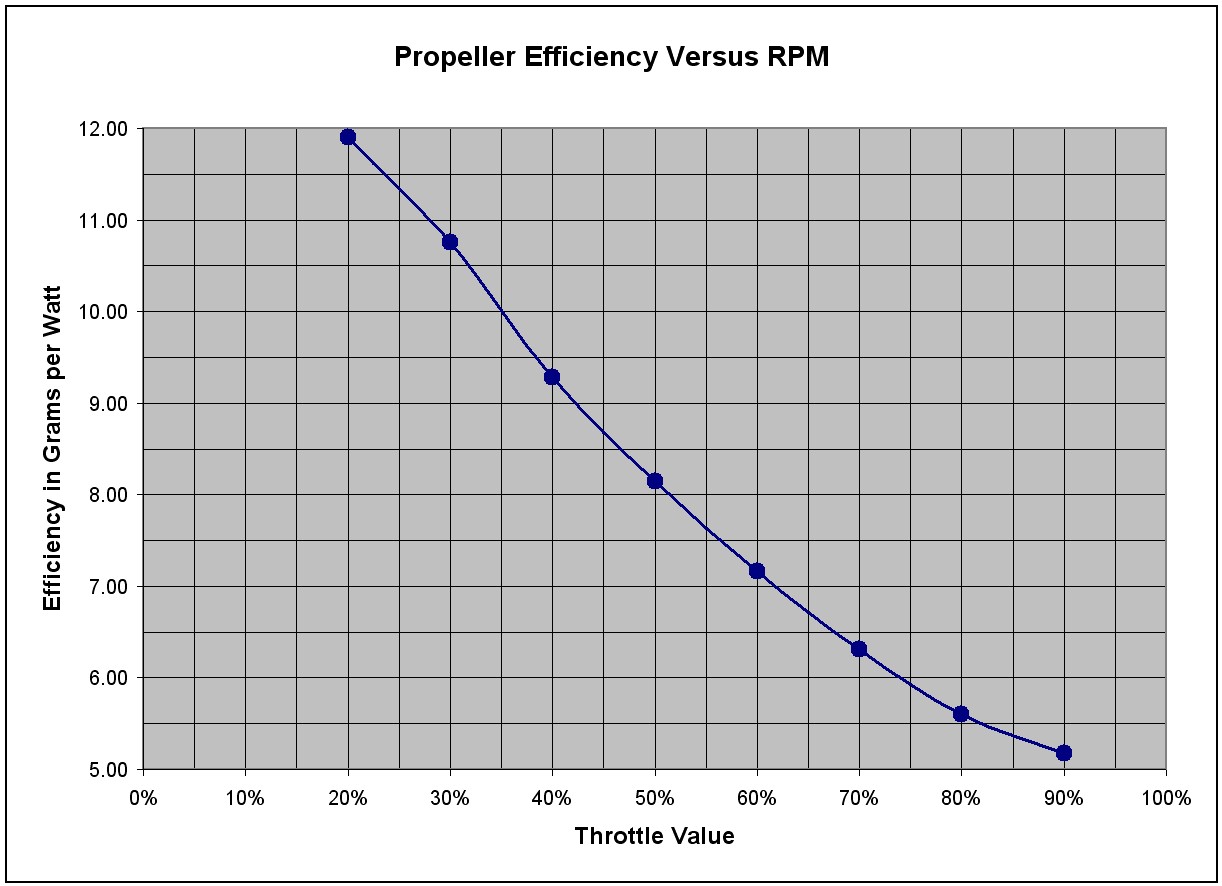 The other thing to consider in power systems is the voltage that the motors are running at. The electrical losses in a power system are directly related to the current flowing through the system. From Ohm’s law we know that power is equal to voltage times current. Voltage can also be expressed as current times resistance, so if we substitute this for voltage, power can also be expressed as current times current times resistance, which is commonly called “I-Squared-R”. This is why electrical losses in a system go up as a function of the square of the increased current.

Batteries are another important consideration when calculating flight times on multirotors. In many cases, the batteries make up the highest percentage of the payload weight of the craft. Quite often, pilots make the mistake of thinking that adding a second battery will double the flight time. This is incorrect for 2 reasons. First, when a second battery is added, the overall weight of the aircraft increases, and this requires more power to hold the craft in a hover all the time. The other thing that people forget to consider is the fact that the props also operate less efficiently at the higher loading, so the efficiency takes a double hit! In most cases, adding a second battery will not double the flight time, but will instead give a 70 to 75% increase in flight time. Each additional battery has a smaller impact in the increase of flight time, and eventually a point is reached where adding another battery will actually decrease the flight time due to the high weight and lack of efficiency in the power system.

When all of these different aspects are combined, it is possible to double the flight time of a multirotor by simply optimizing every part of the power and propulsion system. Putting all of these different considerations together, you will get the longest flight times from a multirotor if you start with the lightest airframe possible, use the largest props that will fit on the frame and power them with high quality, low Kv motors, using higher voltage battery packs. Hopefully this information will help to get the power system in your multirotor optimized for the longest possible flight times and allow you to get the maximum benefit from your multirotor power system.