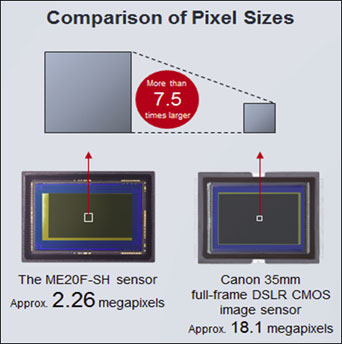 It’s always been a dream to have a camera that’s as sensitive as the human eye. If you’ve ever been outside at dusk, marveled at the low-light beauty of a moment, rushed to get your camera, and then struggled to get anything other than a dark, smeary photo, you understand this dream. Last year this dream came closer to being a reality as Sony released the A7s, a mirrorless digital camera with up to ISO 409,600 sensitivity. After being in the hands of professionals for some time now, Sony’s camera has yielded some impressive low-light results.

But now Canon is finally releasing details on a camera it seems to have been working on for years: a camera that can literally see in the dark.

You may remember seeing a video a couple of years ago showing Canon test footage recorded of fireflies on a very dark island. The sensor that was used in that test has now made its way into its first official camera, the Canon ME20F-SH. Available in December, this camera won’t be cheap at a price point of $30,000, but it could be well worth a rental for certain demanding projects.

But what exactly is it that makes this camera so sensitive? How does it work? To answer those questions, let’s start with the sensor itself. The proprietary full frame 35mm CMOS sensor is quite unlike what you would find in another Canon full frame camera like the 5D. Instead of an 18.1-megapixel resolution like you’re used to, the new sensor boasts a whopping… 2.26 megapixels. Wait, can that be right? Yep, and there’s a good reason for it. You see, the pixels in the new sensor are actually over 7.5 times larger than those on Canon’s classic 35mm sensor (and over twice as large as those on the Sony A7S). Larger pixels means more sensitivity to light, in the same way that larger sensors are more sensitive to light.The more area covered, the more light is soaked in. But now you’re probably asking yourself, “Only 2.26 megapixels? I thought this was a $30,000 camera!” In an age of 41-megapixel smartphones, it’s easy to forget the simple truth that 1920 x 1080 high definition video is still only 2.07 megapixels. That means the sensor will handily cover full HD video, all the while soaking up 7.5x more light. 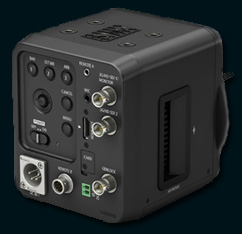 The camera also uses a DIGIC DV 4 image processor to get a clean image, reduce noise, and optimize dynamic range (the new sensor offers 12 stops of DR). With this, the sensor can reportedly achieve up to 4 million ISO (and we get uncomfortable when we have to go to 1,600!) and claims to be able to see in a minimum of 0.0005 lumens. For comparison, a single candle puts off about 12 lumens. That seems like more than enough to achieve some realistic dusk footage.

Another nice feature is that the camera can record up to 60p, meaning we’ll be able to get some minor slow motion in our see-in-the-dark footage. Plus, the camera body weighs in at only 2.4 lbs in a small form factor, so it could easily be flown on a multirotor for some epic high-sensitivity night time aerials.

The Canon ME20F-SH will be available December 2015. What would you most like to use this ultra-sensitive camera for? Let us know in the comments below!