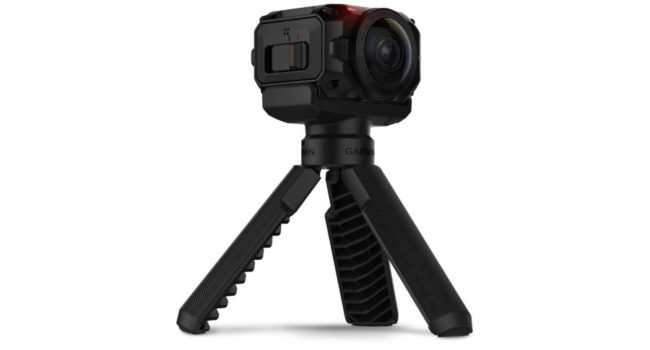 Garmin unveiled a new compact, rugged and fully spherical 360-degree camera today.  The VIRB 360 is waterproof  and can capture video in resolutions up to 5.7K, at 30 fps.  It's not specifically a drone related camera, but read on if you're a fan of or considering 360 video acquisition to see why we're excited about this camera.

The VIRB 360 is intended as a get out and go 360 action camera.  It features 4K spherical stabilization to steady the action no matter what the terrain.  The camera takes care of all the stitching for you so your videos are ready to be shared right away. If you chose to edit your videos prior to sharing, Garmin offers an easy to use editing program for Windows and Macintosh operating systems.  The software allows you to take advantage of the "G-Metrix" telemetry data it records from its built in sensors (such as GPS) and apply it as overlays to your videos.  I'm not certain which sensors specifically will work with this camera, but if it's anything like their previous HD and 4K models, you'll be able to add overlays that cover speed, altitude and distance that playback in real time.

Garmin has been incredibly supportive of our community.  They understand how to create cameras and they listen to feedback from their customers.  We began experimenting with 360 video using Garmin cameras mid 2016 to take advantage of the telemetry it captured.  The results were pretty promising, but required multiple cameras and manual stitching.  Garmin just made our lives much easier in more ways than one.  We can record 360 video and telemetry using a single camera instead of our mocked up rig, and Garmin also made sure that we had a lot of mounting options and a friendlier form factor than some of the more popular 360 "vertical" cameras on the market.

With additional useful features such as live streaming to popular social media outlets, 1 hour battery life of continuous recording, 128GB microSD card support, voice control recording and most importantly, simple to use, this camera is going to have a permanent spot in my camera bag.

The camera will be available in June at a suggested retail price of $799.99.  It's going to sound like a hefty price tag to some, but when you consider all the features this camera offers 5k, waterproof rugged build, telemetry, in camera stabilization, free editing software and live streaming, it's actually a pretty fair price.  You can find more information about it on Garmin's site.

Look for some testing videos from some of our members coming soon.  We have plans to put this camera through multiple high speed tests on the ground and in the sky!

The success of a well executed shot depends on a number of factors, a significant…