By now most of you are probably familiar with DJI’s Phantom series of quadcopters. In this video we cover a Phantom 3 Professional review from a filmmaker’s perspective.

The three main changes in this version of the Phantom are the built-in camera, integrated HD downlink, and the flight performance. Let’s take a look at the new camera first. 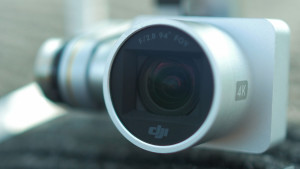 The new camera boasts a 4K sensor that can record up to 4096×2160 at 24p/25p and 3840×2160 at 30p. It can also do up to 60 frame per second at 1080p. Unfortunately, even at 720p there is no 120 FPS recording like that found on GoPros. The downside to this 4K camera is that it records at a max bitrate of 60 mbps. This is a very low data rate for 4K, limiting the amount of detail you can actually capture with it. However, this is the same bitrate as the GoPro Hero 4, so you shouldn’t see any decline in quality from 4K GoPro footage.

A big improvement is the built-in lens, which is the full-frame equivalent of a 20mm. This is tighter than GoPros (9.5mm – 12mm), giving footage a more cinematic look than the ultra wide-angle view normally associated with Phantoms. 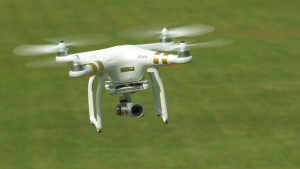 One more very cool new feature is the ability to live-stream 720p video to YouTube during flights. This could be a really great way for journalists to get breaking news online quickly, or give an off-set client a preview of your shots without having to process the footage on the ground.

Next we have Lightbridge HD downlink. Now, Lightbridge itself has been around for a while and you can find out more about it in plenty of other reviews. For now we’ll just say that it’s nice to see it built in to the operation of the Phantom 3. The range is pretty impressive and it’s great to have HD video to fly by, even if it’s just 720p.  The disappointing thing is the low frame rate.  When using an iPad Air we were able to preview around 18-20 fps.  Filmmaker’s want to see the full 24fps when shooting on set, and I found this distracting and a little bothersome.

The biggest technological additions to the Phantom 3 are the number of systems for increasing flight performance. 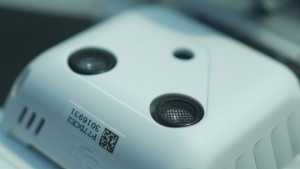 Flight Sensors – The new Vision Positioning sensor (2x sonar sensors 1x fpv cam aiming straight down) can detect patterns on the ground, allowing for stable flight in areas without GPS connectivity, and more accuracy in conjunction with GPS mode. This makes flying indoors and low to the ground much easier than with prior version of the Phantom. 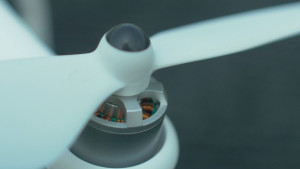 Motors Performance – The Phantom 3 Professional is now being powered by a 4S battery.  This is a nice voltage increase compared to the old 3S.  4S voltage is 14.8 volts and 3S is 11.1 volts.  A lot of people think the new motors on the Phantom 3 are stronger.  They actually aren’t not that different then the older Phantom motors.  The new motors have a 960 KV rating (KV rating means, how many revolutions per minute per volt).  The older Phantom motors had a 920 KV rating.  The extra performance is from the extra volts from the 4S battery.

New Radio – Also included is a brand new radio control. It’s designed to be simpler and more intuitive, allowing the user to fly and record without having to take their hands off the controls. This new radio is also rated for up to 1.2 miles. However, we would never recommend a pilot let their ship out of their sight.

Learning Features – DJI is also stepping up with safety features for new pilots. This includes a Beginner Mode that can create a GPS fence of sorts around the Phantom and keep it from flying outside of that zone. When the Phantom 3 Professional is in beginners mode, the drone is limited to 30 meters distance and 30 meters height (about 90 ft).  This is a really great way for beginners to get practice in a safe space without the worry of the ship getting out of hand.

Overall there is a noticeable improvement in the stability and ease-of-flight in the Phantom 3. Hopefully this, along with increasing awareness about multirotor safety, will decrease the number of accidents we hear of happening with Phantoms.

Folks have asked me, would I ever use the Phantom 3 Professional on a film set?  Sadly, no.  The camera specs are not up to par with high end professional cinema cameras.  In addition, without a gimbal operator (pilot controls the camera too), the movement of any shot is going to be extremely limiting and anti-cinematic.

The Phantom 3 Professional has definitely stepped up the game with impressive features and a decent little 4K camera. At just a $1,259 pricepoint from B&H, the Phantom 3 Pro is a pretty solid way to dip a toe in the waters of aerial cinematography. Of course, the design of the Phantom will always prevent pilots from learning right off the bat how to fly by FPV independently of the camera. But for most users, the newest version of the Phantom will be a good way to get started in the industry without making the financial commitment for an Inspire.