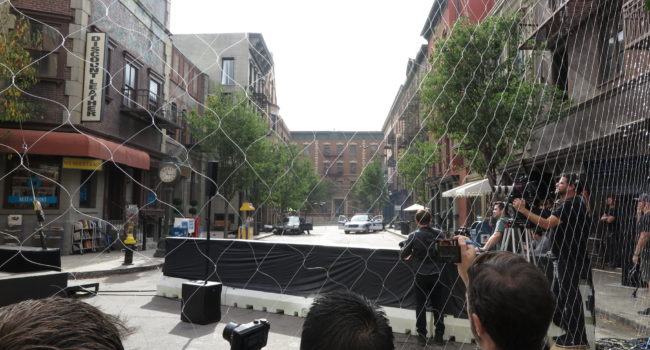 November 15th, 2016 DJI held an amazing event to unveil both the Phantom 4 Pro and the Inspire 2 at Warner Bros. Studios in Burbank, CA.  Most of the DJI launch events have been held on the east coast, but a studio lot in the heart of a production town was the only venue fit to host this production centric event!

When I arrived, the line of cars to enter the lot was insanely long.  It looked like rush hour on the 405 freeway!  The cars were full of people from all corners of the industry eagerly looking forward to seeing what DJI was going to unveil.  There was a lot of speculation leading up to the event, but I don’t think anyone was ready to witness what (or how) DJI was going to announce their new products.

Once you made it past the two security check points and on to the back lot, we were directed to sit down in front of a stage adjacent to a facade of a street in New York.  It was a great location and the set up was quite impressive as a back drop for the event.  I don’t think that the guests realized there was a practical reason for the close proximity to the NY Street set, nor why they were given ear plugs at the registration desk.  More on this later…

There were a lot of people attending this event!  I walked around and spoke to some familiar faces prior to the start of the announcements.  Some of the most well respected technical and creative minds were on hand to witness the launch.  I caught up with some old friends from Apple who have a great relationship with DJI and may or may not be looking for a new tool to acquire some aerial views of their new campus regularly.  I also spent time with some technical directors from local studios and networks to gauge their interest in aerial technology, but my favorite conversations were with some of the DP’s in the audience like Matthew Libatique (Black Swan, Straight Outta Compton.)  Matthew is a big fan of the technology and it’s use in production.  This event wasn’t the right time to interview him, but I warned him that I’d be contacting him in the near future for to talk shop.

The audience was instructed to take their seats and the show began.  Presenters from DJI included Michael Perry, Director of Strategic Partnerships, and Paul Pan, Senior Product Manager. The first new product shown was the Phantom 4 Pro with it’s new flight autonomy “TapFly”, larger camera sensor and addition of new infrared obstacle avoidance sensors.  One of the most interesting new features was the addition of a built in screen produced by DJI on the radio.  I didn’t get much hands on time with the radio, but I’m looking forward to hands on time in the near future which of course I’ll share with you all. 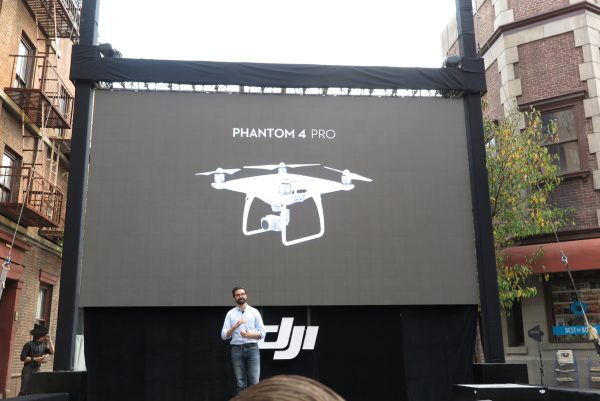 One of the new accessories I’m looking forward to the most, are the Crystalsky IPS monitors by DJI.  They announced two options, a 2k display and an HD display with 1000 and 2000 nits.  This will make them incredibly usable in direct sunlight and since they’re IPS panels, I’m really curious about how much they can be tuned to match a production display. 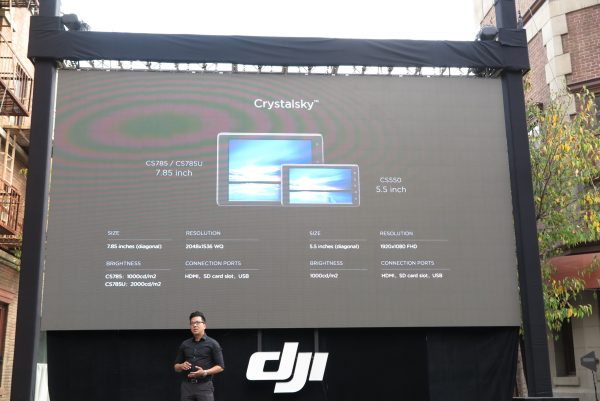 As if a new Phantom and displays weren't enough, the audience was then treated to a fly over of the all new Inspire 2.  (Now here is the part where those ear plugs we all ignored would’ve come in handy.)  A short introduction was given, and then “Action” was called to start off a live production of a bank heist all shot with the Inspire 2.  The production included a shoot out between police and bank robbers, and from what I could see, it was shot entirely using the Inspire 2. We witnessed the transition from air to handheld and saw just how versatile this set up could be for scripted or even live production.  The Inspire 2 was able to effortlessly capture the police car racing down the street to the scene of the crime and continue to capture the action of the police offers jumping in to save the day!  It was a really impressive display of the technology in use and showed off some of the production tricks used on the shoot of “The Circle.”

Speaking of “The Circle,” Claudio Miranda also spoke at the event about his experience using the Inspire 2 in production.  Claudio is very hands on in every aspect of production and gave the system a great review.  He’s not going to ditch his camera of choice to move over to the Inspire 2 exclusively anytime soon, but what better testimonial for a camera than from an Academy Award winning cinematographer! 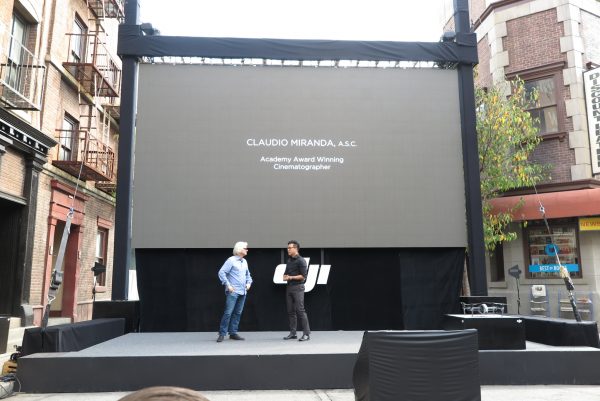 You can read all about DJI’s new products on their website or just click the links below.  I’m looking forward to spending more time with the Inspire 2 in the near future and I’m looking forward to seeing what else DJI has to show us in 2017.  They’re trying to show the industry that they’re not just a drone company, and with this new release, and the feedback they’ve incorporated from the industry, I think they’ve proven their point.