We love using our Amimon Connex system, whether it’s on our aerial rigs or on the ground for gimbal operation and film set monitoring. Now we have the Connex Mini, which is essentially the size and specs of the Connex cut in half. This means the Mini air unit weighs only 60 grams, or just over 2 ounces! This incredibly lightweight hd wireless downlink system is great for smaller aerial systems where every gram matters. 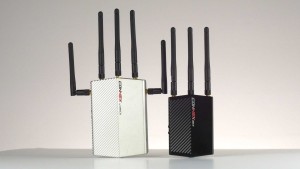 In conclusion, the Connex Mini offers many of the same features of its predecessor while offering a significantly smaller transmitter at the cost of a 50% range decrease. This will be a fair trade for many users wanting to cut down on weight, especially since this is the smallest HD system of its class on the marketplace. Currently, the Connex Mini retails for $1299, which is $300 less than the cost of a full sized Connex at $1599.

We recommend the Mini for aerial users who are concerned about size and weight. The Mini is also great for ground gimbal because it is low-profile. It may not perform as well as the full-sized Connex in film set monitoring situations if there are many obstructions such as walls, which can severely weaken the signal. Overall, we would recommend the Connex Mini if are really concerned with size and weight, but would otherwise suggest spending the minimal extra cost for the full Connex, which is the best HD downlink at its price point.